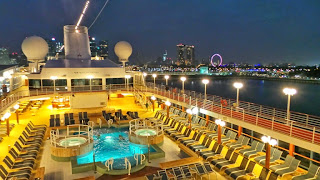 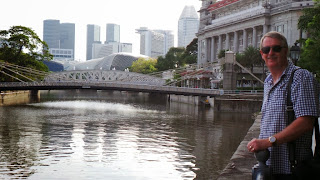 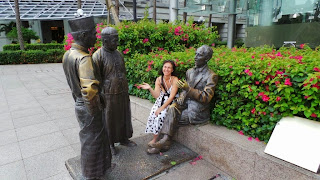 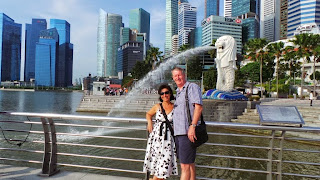 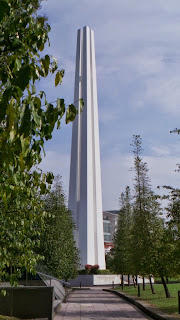 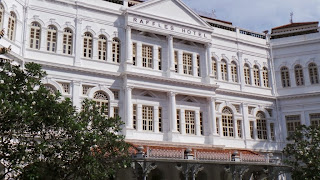 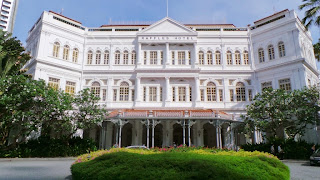 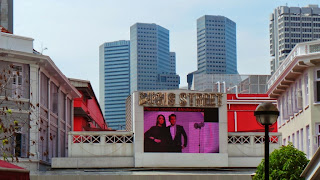 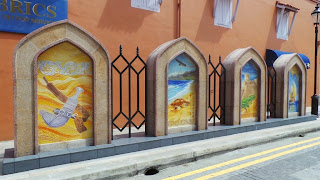 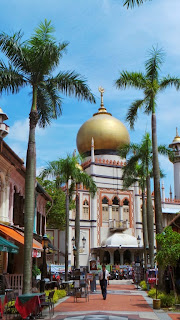 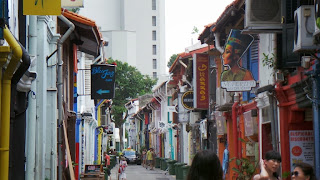 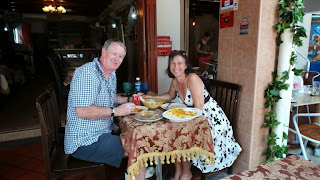 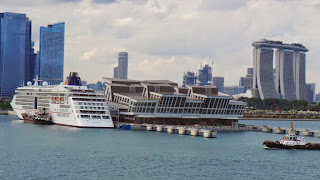 For some this was where their cruise ended; for us it was another port day to get excited about... Being there only around 7 months ago we wanted to find something new to do.

We berthed at the Marina Bay Cruise Terminal alongside the Europa 2. We were disappointed that princess did not put on a shuttle into the city like they did on our 90 day cruise.  I guess as there was only 94 of us staying on they probably didn’t think it worth it.  This meant we either had to catch a taxi or catch the local bus (402) to Marina Bay Station, then the Mrt to where ever you want.... We chose the latter as the bus was sitting there as we exited the terminal. Now a word of advice if you don’t have one of their transport cards make sure you have the $1.30 to put into the machine.... they don’t give change so what should have cost us $2.60 cost us $4.00.

We caught the Mrt to Raffles station and walked around to Merlion Park..  In the past we have always seen the Merlion from the River, so we decided on a different view... It was Sunday morning and although the locals were nowhere to be seen, other Asian tourists were everywhere, making the most of every photographic vantage point.

We walked around the esplanade and through a park stopping at each of the war monuments.  Along a little further and we found the infamous Bugis Street.  According to Garry, not a scratch on what it used to be like. An open air market and hive of activity.... well now it is a covered market like all other markets selling cheap goods made in China... We walked a little further and found the Sim Lim Mall and avoided purchasing any new technology.

Another mission for our day was to visit Arab Street.  We had done China town and little India before, so we were looking forward to the Middle Eastern experience.  If only I sewed my own clothes.... the Fabric stores along Arab Street are to die for.... Colourful Silks and beautiful beaded laces were displayed in every shop front.

Turning down another little street we found the Musjid Sultan Mosque and in front of that another little pedestrian street that looked like it would be a blast in the evenings... it was lined with Restaurants and bars  representing Egyptian, Moroccan and many other middle eastern cuisine.  You could just picture it all lit up with hundreds of people filling the tables and chairs that spilled out on to the path.

We decided on a little Moroccan for lunch.  Beef Kofta’s and a Brinyani Chicken.  They told us that the Brinyani would take 10 minutes longer but we were prepared to wait.... and wait is what we did ... while others got served around us we still waited... Garry mentioned now he understood why on the menu it stated “once they started cooking your meal you had to pay for it”..... many more impatient people would have simply walked away.

On saying that it was well worth waiting for.... just when you thought that you were not that hungry we managed to wipe the plates clean.... wonderful flavours and tastes sure to send me home looking up those cook books and getting my Tagine out of storage again.

What is a visit to Singapore without visiting my favourite shoe shop D & C..... It felt like we walked the entire length of Orchard Rd to find one but each of us managed to find a pair of shoes. Being non sale time prices were a little bit dearer at $28 instead of $15.

By now we thought we had to start to head back to the ship if we were going to do it by public transport.  When we got back to Marina Bay station and exited on to the street we were grief stricken to find that nothing looked familiar.  This was not where we entered and there was not a bus stop to be seen anywhere.... eventually through small and bad signage we found the bus stop.

Back on board and we were surrounded by a lot of unfamiliar faces and the sounds of Australian accents were replaced by an American twang.